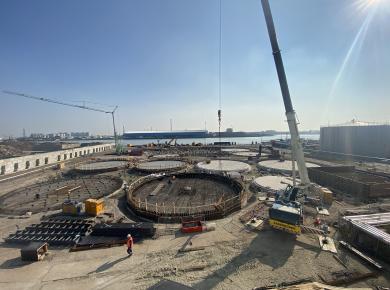 The increasing demand for biofuels is also resulting in extra demand for storage capacity in the Netherlands. Neste, world leader in the production of biofuels, also has a strong position in the Netherlands and is responding on this extra demand by building extra capacity at its terminal location in Vlaardingen. Project manager Steffen Walgien is positive about the collaboration with KH Engineering as EPCM contractor.

Technologically speaking, the expansion of this terminal is not that complicated. But the planning is, and that's what makes this project special,' says Steffen. We are now aiming to have the product in the tanks by December, which is very ambitious.

Safety as a number one priority
The planning of this project may be important, but 'safety is the number one priority at Neste', says Steffen. In this area, we will not settle for a 'six', but aim for a '10'. That requires a continuous focus from the entire project team. We constantly emphasise safe behaviour and a safe workplace, sometimes ad nauseam.

Flexibility
For the realisation of the project, Neste called in the help of KH Engineering. They are our EPCM partner. They came out on top after a tender and really turned out to be the right partner for this project, says Steffen. In their proposal, they promised customised work with a flexible approach. The planning and approach called for flexibility and creativity from the KH Engineering team. While the detailed engineering had just started, the stakes were already in the ground and the tanks were already in production. The holes were already being drilled in the tanks, without engineering knowing exactly where the pipes were going to be. This puzzle was solved in a good and structured way with the chosen flexible approach. 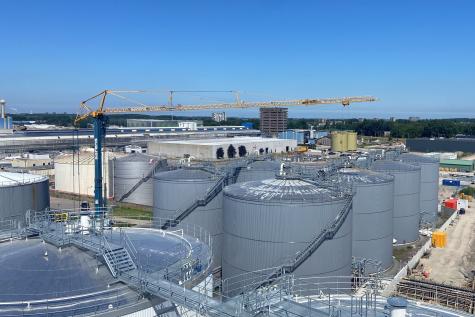 The project consists of a new tank pit with fifteen tanks, a truck unloading area with five unloading areas and one truck washing area. In addition, a service building is being built, which will house a workplace, control room, offices and a changing and dining area. The project also requires more electricity, so a new substation will be built in combination with a new high-voltage connection. Furthermore, the capacity of the utilities will be expanded with a compressor and buffer tank for instrument air.

Speed
The speed of work required a number of special decisions. Steffen: 'We ordered various pieces of equipment far in advance.  We also had to start the pile-driving work in advance. In order to work in parallel as much as possible, the tanks were prefabricated with Geldof in Antwerp. In this way, the foundation work and tank construction could take place simultaneously. The tanks were shipped to Vlaardingen on pontoons in May. There, they were lifted into place by gigantic cranes. Then there is the milestone of "mechanical completion", now scheduled for the end of October. Then, after a successful commissioning phase, we hope to start up before Christmas.

Good cooperation
Steffen is very satisfied with the cooperation with KH Engineering as EPCM contractor. Neste's small project team in the Netherlands needed a strong partner who could unburden Neste for this project by taking on the entire EPCM. The objective was to form an integrated team together with KH Engineering. We have succeeded in this so far. At the beginning of the project, project team members of Neste were given a workplace at KH Engineering's office in order to keep the lines as short as possible and to work as one team. During the construction phase, we are also on site together and we strive to ensure that it does not matter which logo is on our safety helmet.

For more information about Neste: www.neste.com.