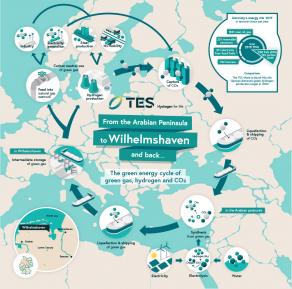 The city of Wilhelmshaven (with Germany's only deep sea port) will play a crucial role in Germany's energy transition. To earlier plans for a large green hydrogen plant, a terminal for green gas will now be added. Moreover, there will be a CO2 export facility. CO2 captured throughout Germany will then be exported to the Middle East. There, it will be used to produce climate-neutral methane gas through electrolysis using electricity from cheap solar energy. This gas is transported by ship to the terminal in Wilhelmshaven, from where it flows into the gas network via existing gas pipes. Thus the circle is closed.

Northern Germany is to become a central hub for the production and import of green hydrogen, the export of CO2 and the import of green gas. Germany's only deep-water port in Wilhelmshaven plays a central role in this. A so-called "Green Energy Hub" is currently being actualised there by the company Tree Energy Solutions (TES). TES is a green hydrogen company that supplies carbon-free energy on an industrial scale. Their aim is to accelerate the energy transition by using existing global energy infrastructure to provide customers with green hydrogen, green gas and green electricity. Earlier plans for a green hydrogen plant, along with a new green gas terminal to be built, gained momentum following the decision to reduce dependence on Russian natural gas.

Industrial end-users
The new complex to be built, the "Green Energy Hub" in Wilhelmshaven, consists of several components that will provide green hydrogen and green gas all together. The hydrogen backbone network of OGE and RWE will bring the green hydrogen from the new plant to industrial end-users. There will be a connection to the CO2 transport network of OGE (Open Grid Europe, a large German gas network company). This will ensure that CO2 captured in Germany can be transported to its destination in the Middle East. There it is used to produce climate-neutral methane gas through electrolysis using electricity from cheap solar energy. It is then transported back to the import terminal in Wilhelmshaven by ship. The import terminal will consist of six berths and eight storage tanks with a total storage capacity of 1.6 million m3 . The terminal will be directly connected to an existing large gas pipeline network and to a number of salt caverns suitable for storage. 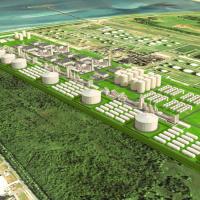 KH Engineering is providing various services for this billion-dollar project. Commercial manager Kees Vonk explains: 'You can think of what I call "interconnecting teamwork". By this I mean that we take care of the connection of all kinds of installations that are necessary to make this brand new cycle actually work. Together with the customer, we have combined the scope of all kinds of underlying installations and projects into one whole. That unifying part is interconnecting. But it is also interconnecting in the sense of teamwork, since colleagues from all three branches of KH Engineering are working on it. For example, the Cost Estimate was made by colleagues in the Netherlands and part of the initial design and planning was done within the Front-end engineering design (FEED) in Belgium and the Netherlands. It is a special project for us. The client, TES, already knew us from our work for its Dutch terminals. Therefore, we were delighted to be asked for this unique project as well. I think it is a very clever idea to capture CO2 and use it as a raw material. Especially to do this in the Middle East, where you benefit from very cheap solar energy. Therefore, you could say: "With KH Engineering, you bring the sun into your home!